Did you know that the missionary position is one of the most basic of sex positions, as well as being the most traditional? This position requires a partner. One person, usually the woman lies on her back with her partner on top. They have amazing eye and lip contact. It creates great intimacy, this position.

How did the hot missionary position get its name?

The natives the missionaries taught and who lived in the wild unknowns were curious about how the missionaries had sex. So they peeked into their huts and saw them having sex. They called that sex the “Missionary” position from then on. In the Victorian era, the missionary position was what you used and what was approved. No one thought up other positions and ways of having sex.

The missionary position is still very popular today, because it works so well. It is actually a very romantic position. However, because sex has become such a hot topic in the world today, much like the health industry, a lot of people believe that if you are only using the missionary position to have sex, you are boring and old fashioned.

So without further ado, here we have 8 sexy ways that you can spice up the missionary style sex position. You will love trying out these deviations. After all, missionary sex is a very hot position to be in. It offers great intensity; there is a lot of romantic eye contact, skin-to-skin contact. Because of such close skin contact, there is the perfume and smells of each other’s bodies – so says sex therapist, Deb Laino.

The guy lies on top of the girl, just like in the missionary position. Then he will raise himself up so that he is more to a 90-degree angle from the woman. The main goal here is that the shaft of his penis will be rubbing against her clitoris as the guy penetrates her.

She lies on her back with each leg over and around her guy’s shoulders. Her guy will kneel with each knee at the side of her waist. He will rest his hand on top of her thighs as he enters her. She will just need to be lying comfortably for this position.

In this position, she will lie back, placing her right leg on his right shoulder. The guy will bend her left leg and place it beside his side on the right. He will ease forward into her vagina. She can touch her clit with the guy for extra exciting stimulation.

In this position, the girl will wrap both of her legs around her guy’s back. This is great because it allows for deep penetration. If you feel like even deeper penetration, she could place a pillow under her lower back area. If a guy isn’t that well-endowed, this position will work very well too!

This position is the same as the classic missionary position sex but the guy will wear a vibrating cock ring. The cock ring is able to boost the size and strength of the guy’s erection. The vibrations on the girl’s clit can bring her to sizzling orgasms.

He will lie on his back with his knees bent and feet flat on the bed. She will sit on her partner’s face, facing forward. Her legs will be spread around his head. Then she will bend backward as if creating an arch with her body. She will then be facing his erect penis while he can lick her clitoris. Basically, this position comes down to the girl’s flexibility.

The missionary position is actually one of the best positions to use sex toys because there is so much room and access. There are wonderful sex toys that have been particularly designed to use in the missionary sex position for explosive climaxes.

She will place a pillow under her butt before the guy enters her. This is so that her pelvis will be raised which will allow him to penetrate her more deeply. He will use long and throw thrusts in this position. “Having the receiver elevate their hips with a pillow will increase the chances that their internal hot spots will get targeted during Missionary.” That’s what sex educator Carly S, the founder of DildoorDildon’t.com says.

The missionary is probably the most common sex position used. Today, it is also, probably, the most underrated position. This is because the kids of today want more fun, more different, and shocking ideas. And then this true beauty of a sex position is kind of overlooked.

In fact, the missionary position is the best position to have sex in, actually, and deserves a lot of respect. That’s why we’ve given you 8 more added variations you can enjoy in this position. Basically, if you are looking for true intimacy with real stimulation of all the sexual bits-n-pieces, this position requires low effort. Yet it still offers such versatility. As we have shown you, these variations offer you a gateway to some very exciting, different, and new possibilities.

Inverted Missionary Sex Position: Everything to Know For Maximal Pleasures And Sensations 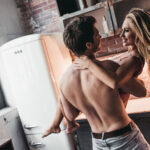 Amie is our dating hero, and she knows everything about how to make relationship between people better! She has excellent skills that she uses to make people’s life better!